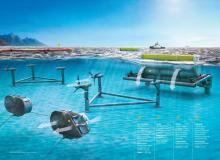 Tidal energy is a renewable energy powered by the natural rise and fall of ocean tides and currents. Some of these technologies include turbines and paddles.
Different Types of Tidal Energy Systems
Tidal Barrage – A Tidal Barrage is a type of tidal power generation that involves the construction of a fairly low dam wall, known as a “barrage” and hence its name, across the entrance of a tidal inlet or basin creating a tidal reservoir. This dam has a number of underwater tunnels cut into its width allowing sea water to flow through them in a controllable way using “sluice gates”. Fixed within the tunnels are huge water turbine generators that spin as the water rushes past them generating tidal electricity.

Tidal barrages generate electricity using the difference in the vertical height between the incoming high tides and the outgoing low tides. As the tide ebbs and flows, sea water is allowed to flow in or out of the reservoir through a one way underwater tunnel system. This flow of tidal water back and forth causes the water turbine generators located within the tunnels to rotate producing tidal energy with special generators used to produce electricity on both the incoming and the outgoing tides.

The one disadvantage of Tidal Barrage Generation, is that it can only generate electricity when the tide is actually flowing either “in” or “out” as during high and low tide times the tidal water is stationary. However, because tides are totally predictable, other power stations can compensate for this stationary period when there is no tidal energy being produced. Another disadvantage of a tidal barrage system, is the environmental and ecological effects that a long concrete dam may have on the estuaries they span.
Tidal Stream

Tidal Stream – A Tidal Stream Generation system reduces some of the environmental effects of tidal barrages by using turbine generators beneath the surface of the water. Major tidal flows and ocean currents, like the Gulf Stream, can be exploited to extract its tidal energy using underwater rotors and turbines.

Unlike off-shore wind power which can suffer from storms or heavy sea damage, tidal stream turbines operate just below the sea surface or are fixed to the sea bed. Tidal streams are formed by the horizontal fast flowing volumes of water caused by the ebb and flow of the tide as the profile of the sea bed causes the water to speed up as it approaches the shoreline.

As water is much more denser than air and has a much slower flow rate, tidal stream turbines have much smaller diameters and higher tip speed rates compared to an equivalent wind turbine. Tidal stream turbines generate tidal power on both the ebb and flow of the tide. One of the disadvantages of Tidal Stream Generation is that as the turbines are submerged under the surface of the water they can create hazards to navigation and shipping.

Other forms of tidal energy include tidal fences which use individual vertical-axis turbines that are mounted within a fence structure, known as the caisson, which completely blocks a channel and force water through them. Another alternative way of harnessing tidal power is by using an “oscillating tidal turbine”. This is basically a fixed wing called a Hydroplane positioned on the sea bed. The hydroplane uses the energy of the tidal stream flowing past it to oscillate its giant wing, similar to a whales flipper, up and down with the movement of the tidal currents. This motion is then used to generate electricity. The angle of the hydroplane to the flow of the tide can be varied to increase efficiency.

Tidal energy is another form of low-head hydro power that is completely carbon neutral like wind and hydro energy. Tidal power has many advantages compared to other forms of renewable energy with its main advantage being that it is predictable. However, like many other forms of renewable energy, tidal energy also has its disadvantages such as its inflexible generation times dependant upon the tides and the fact that it operates in the hostile conditions of the oceans and seas. So here are some of the advantages and disadvantages associated with “tidal energy”.